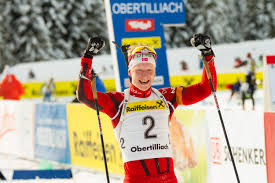 Things to knøw about Johannes Thingnes Bø :
He was born on the 16th of May 1993.
He was born in Styrn, Norway.
His big brother is Tarjei Bø.
He is the youngest Norwegian to appear in the National Team.
He is a three time Junior World Champion.
In 2 Junior World Championships he has won 5 gold and 2 silver medals.
He won a gold and silver medal in the World Junior Olympics.
He won the Super Sprint at this year’s Blink Festival.

Sø we have yet another young and very talented Norwegian breaking onto the World Cup. Where do they get them all? Well Johannes isn’t exactly an unknown quantity. He has been setting the biathlon world alight now for a good few years in the Junior ranks and last year saw his debut on the Senior tour. He competed in the final three events of the season in Holmenkollen, Sochi and Khanty-Mansiysk. Two 20th place finishes in the Sprint and Pursuit made for a very promising debut for the 20 year old.

He is a fast and accurate shooter and he is also a good skier which will be worrying to some of the senior members of the Norwegian Team. With the Olympics coming up there are probably 2 spots available on the relay team and Johannes has a good chance of getting one. If he can perform well on the World Cup he will give the Norwegian selectors a big headache for Sochi. If he can replicate what Tarjei did in his debut season it will be a great start to his Senior career.

Some might argue that Sochi may be a bit too soon for Johannes but if he is good enough then he is old enough. He managed to beat the likes of Svendsen, Fourcade and his brother in this year’s Blink Festival in the Super Sprint event. Obviously this takes places in the summer on roller-skis and isn’t a huge indicator of form for the season but it will definitely give him confidence and is great experience for the youngster.

It will be very interesting to see what Johannes can achieve this season. He has the talent to get some Top 10 finishes on the World Cup tour and possibly even a podium but we have to remember it will be his first proper season and it’s a steep learning curve. Whatever he does I am sure he will be good to watch and I love it when a new biathlete comes up to the Senior tour and gives the big boys a run for their money. We may have to wait until the 2014 season to see him at his best with a year’s experience under his belt but I am really looking forward to seeing Bø versus Bø* and watching the progress of biathlon’s next big Thing!

*if anyone from NRK is reading this it would make a fantastic biathlon based gameshøw! Possibly presented by Emil Hegle Svendsen!;-)

One thought on “Johannes: The next big Thing!”