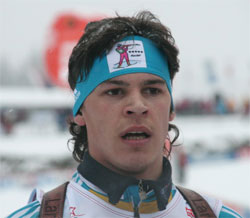 Cleverly disguised as the German team last year (the ski suits were hard to distinguish) the Kazakhstan biathlon team enjoyed a pretty good season. One biathlete in particular achieved some of his best results ever. Yan Savitskiy was born in Ridder, Kazakhstan on April the 29th 1987 and achieved a career best result in the World Championships in Nove Mesto finishing 11th in the Individual.

Last season also saw him produce his best result on the World Cup finishing 16th in the Sprint in Anholtz. He followed that up with 3 further TOP 20 finishes and 2 in the TOP 30. He finished the season in 52nd place in the Total Score up 18 places from the previous year. He was 22nd overall in the Individual event which was his highest placing from all the different disciplines.

Yan is one of few biathletes who has already won a gold medal at a major games. He won relay gold in his home Asian Games in Almaty in 2011. Having already competed at the 2010 Vancouver Games this gives him some much needed experience in preparing for and competing in Sochi in February.Almaty is also bidding to host the 2022 Winter Olympics and so they will be looking to all their winter sports stars to try and raise the profile of Kazakhstan as an Olympic venue. Any success their athletes provide is sure to help them in their campaign.

So what does this season hold for Yan? Well his results so far in the first third of the season have been nothing to write home about.He got a 30 second penalty in the Pursuit in Hochfilzen for starting outwith the 3 second interval but still recorded his top results so far finishing 51st in both the Sprint and Pursuit. Hopefully he is saving his best form for after the Christmas break! His best event from past results would seem to be the Individual and that is probably his best chance of achieving a TOP 10 result both on the World Cup and at the Olympics. It would be an amazing result for Kazakh biathlon and Yan himself if he could do it. It would also be a boost for Asian biathlon in general.

If anyone can pull this major achievement off it has to be Kazakhs-Yan Savitsky!