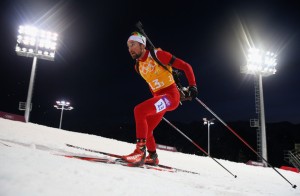 Benjamin Weger is a bit of a biathlon conundrum. Considering his age and where he is from he has had a fantastic career so far on the World Cup which is just missing a first win. He has a better record than many other biathletes who are older and from bigger biathlon countries. So what is the conundrum then? Well he hasn’t been able to translate that World Cup success over to the World Championships or Olympic Games – yet!

Benjamin is a Swiss biathlete who was born in Brig on the 5th of October 1989. He is a keen mountaineer (shocking behaviour from a Swiss person!) and enjoys fly fishing. He is also lucky enough to have his own supporters group called Fanclub “WÄGi” based in Geschinen where he lives.

Benjamin’s best result on the World Cup came back in season 2010/11 when he finished 2nd in the Individual race in Pokljuka. That was the first of 4 podiums that he has achieved so far in his career. The other 3 all came in season 2011/12 which saw him finish third in Kontiolahti in the Sprint and also in the Sprint and Pursuit in Hochfilzen. In fact that season has been his best to date with an overall result in the Total Score of 18th.

His best result last season was a 5th place in Annecy in the Pursuit and he also came 8th in Oberhof in the same event. It wasn’t the season that he might have been expecting coming 37th in the Total Score with his best individual result being unsurprisingly in the Pursuit standings where he was 32nd overall.

His performances in the Olympic Games in Sochi were not that great unfortunately. His best position there was 48th in the Individual. In fact many of his championship performances have been a bit disappointing which is where the conundrum kicks in. In fact his best Championship performance came in his Junior career. He won silver in the Sprint in the 2009 Junior World Championships in Canada behind Lukas Hofer. His top result so far in the Senior ranks was a 19th place last time round in Nove Mesto in the Individual.

This must be something he is desperate to rectify and this year’s competition in Kontiolahti will give him the chance to do just that. He has had some good results there finishing twice in the Top 10 so that should give him confidence. He knows from World Cup results that he is good enough to get on the podium and will probably get his best chance in the Individual. The Swiss Mixed Relay team has some potential too with the Gasparin sisters leading it off so they should be able to get a solid result. It could be a good year for Weger now he has the Beni-fit of experience!