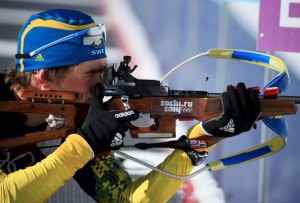 Fredrik Lindström is only 25! Can you believe that? It seems like he has been on the World Cup for ages! He must have started when he was 12 or something! Actually he made his debut at age 19 in Hochfilzen and where he finished 47th in the Sprint race.

Freddie was born on the 24th of July, 1989 in a bread bin. Wait a minute that’s not right! He was born in Bredbyn of course! That’s in the Örnsköldsvik Municipality in Sweden as you all know! It also makes part sense of his Twitter name which is @bredbypajken. As for the rest you will have to ask him. I mean I guess I could have asked him but you need to retain some mystery in your life!

Freddie had great start to last season when he came second in the Sprint race at his home World Cup round in Oestersund. Many, including me, thought that this was a sign of a great year to come but unfortunately it turned out to be his best result of the whole season. After finishing 7th in the Total Score in 2012/13 big things were expected from Mr. Lindström. However after making good progress every year in his career until now he slipped back a little last year and finished only 17th overall with just that one podium to his name.

He has won a race on the World Cup though which as you know is not that easy to do and some older and more experienced athletes than him have not managed it yet. It came back in season 2011/12 in Anholtz where he took victory in the Sprint. Actually he had a lot of great results that season which is why people expect a lot from him because they know what he is capable of.

Freddie has always performed well in the World Championships and has 2 bronze medals to prove it. In Ruhpolding in 2012 he was third in the Mass Start and in 2013 in Nove Mesto he was third in the Individual. He also just missed out on a bronze in the Men’s relay in 2011 in Khanty-Mansiysk when the team came in fourth. In fact last year the Swedish Men’s Relay team were on excellent form. They were twice on the podium on the World Cup coming second in Hochfilzen and Antholz and also took two fourth place finishes in Annecy and Ruhpolding. They were tipped to make the podium in Sochi too with such great form but ended up a disappointing 10th.

With the retirement of half of that relay team the pressure will be on Freddie and also Tobias Arwidson to keep up those impressive results. Without the talent and experience of Bergman and Ferry it will be hard to repeat such feats but Sweden has the likes of Peppe Femling and Ted Armgren who will finally get their chance to shine. Freddie is going to have to handle the new pressure of being Sweden’s top male biathlete and a lot will be expected from him from Sweden’s coach Johan Hagström. He will have to set the example for the rest of the team.

So will he be able to use that extra pressure to get back to his best? I think he can. He is a really talented biathlete and for someone so young he has a lot of experience to fall back on. It will be a big year for him as the leader of Team Sweden and he will be looking to add some more podiums and wins to his collection. With the World Championships “next door” in Finland he will have a lot of supporters there and if his past record is anything to go by he should get a bronze medal at the very least! The other biathletes need to keep an eye out for Freddie as I think it could potentially be his best season yet! Beware there is a Lind-Störm coming!