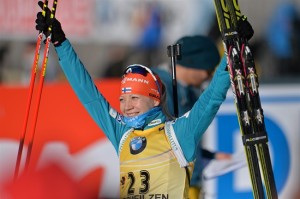 To Austria this week and between eating strudel, singing all the songs from The Sound of Music and getting into trouble for outrageous stereotyping there was just about time for some biathlon! Generally speaking shooting clean in a Sprint Race means you have a good chance of winning it. Not however if you happen to be racing against Kaisa Makarainen! At the moment she can afford a miss and still win, much to the consternation of Karin Oberhofer. The Italian produced a great race, shooting clean, that ended with her first ever podium. Second place is fantastic for the Italian but it would have been first but for Makarainen’s amazing ski speed. In third was Tiril Eckhoff who is rapidly emerging as a real contender for the Chrystal Globe. Other ladies who impressed were France’s Justine Braisaz who on her World Cup debut finished 17th. Enora Latuilliere continued her good progress in 20th the German ladies had 3 in the TOP 10 -Hildebrand 5th, Hinz 6th and Preuss 10th.

The men’s race was a bit of a surprise even before it began with Fourcade and Bjoerndalen choosing to go in group 4 with the later starters. This was to take advantage of colder conditions making a faster track. It didn’t work and Johannes Thingnes Bø skied round like a rocket beating the field by 14 seconds. The Germans also did well here completing the podium with Simon Schempp in second and Andi Birnbacher third. Home favourite Dominik Landertinger just missed the podium coming in fourth. Elsewhere Dutch biathlete Joel Sloof qualified for his first ever Pursuit by coming in 52nd and Romania’s Cornel Puchianu matched last weeks 28th place to equal his best result.

Saturday saw the first Men’s and Women’s Relays of the season. Well they were definitely worth the wait. The Women’s race was one of the best I have seen in a long time. The lead changed several times and there were so many good performances and of course a few bad ones which made it all the more exciting. The Germans carried their great Sprint form over and were so calm and collected for such a young team especially Preuss who was on the last leg. Kummer also did well on the first leg and Hildebrand and Hinz were strong in between. It did look like Russia might cruise to victory but Glazyrina had a total meltdown on the range and handed the win to Germany. Domracheva outskied Vitkova to take second, an exceptional result for them and the Czechs were impressive in third. Italy’s chances of a podium were ruined by some bad shooting from Gontier and Tiril Eckhoff pulled of a miracle to get Norway back to 5th after starting her leg in 14th!

The Men’s race was characterised by some excellent shooting. The Russians won by only using one spare round which is incredible! Lapshin was the culprit missing one target but we can forgive him! The French also shot well only using 4 spare rounds and Norway came in third despite Birkeland and Tarjei Bø both needing all three spares in their standing shoots on legs three and four. Austria and Germany had a sprint for fourth where Landertinger beat Schempp to the line and Canada finished in sixth,a good result for them.

Sunday was Pursuit day and a dominant Kaisa Makarainen was untroubled on her way to victory. She missed 1 shot but won with time to spare. In second was Ekaterina Glazyrina who recovered in incredibly quick time from her relay disaster and also just missed 1 target. In third was France’s Anais Bescond with her best result of the season so far. She had the strength at the end to hold off Podchufarova who was 4th and a magnificent Rosanna Crawford who came from 34th to finish 5th which is a career best result for her. Other good performances came from Monika Hojnisz (POL) 40th-11th, Nadezhda Skardino (BLR) 36th-12th, Annelise Cook (USA) 50th-33rd and Daria Virolaynen (RUS) 51st-35th!

The men ended the weekend with a shocking result! Yes Martin Fourcade won – that hardly ever happens!;-) Actually he wouldn’t have won if Johannes Bø hadn’t missed two targets in his third shoot when he was well in control of the race. Simon Schempp was second proving he has a last found some consistency and Jakov Fak came in third holding off the challenge from a tired looking Johannes Bø. Vladimir Iliev added to his 19th place in the Sprint with an 11th place here which is great news for Bulgarian biathlon and other good races were had by Quentin Fillon Maillet (FRA) 45th-15th, Fredrik Lindstrom 47th-22nd and Leif Nordgren (USA) 51st-37th.

Overall Hochfilzen was a great race weekend and thank god they got the snow to let it go ahead. Kaisa Makarainen extended her lead in the yellow bib and Martin Fourcade will wear the men’s next week after wrestling it from Svendsen. Thursday is when we race again in Pokljuka and with the great results form the Slovenia biathletes the home crowd will be really looking forward to it. The biathlete will be looking forward to a sneaky Kremna Rezina(delicious Slovenian dessert!) down in Bled too! I really enjoyed all the races in Austria and I also enjoyed ‘Filzen you in!