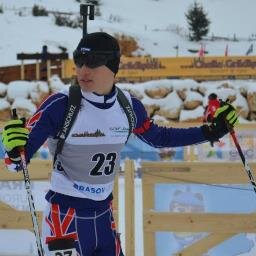 Next under the Biathlon23 microscope is Great Britain’s Robert Sircus. The 19 year old has already competed in 1 World Youth/Junior World Championships in Presque Isle. Here he answers questions about what is like being a young biathlete.

As a British athlete you have chosen a really tough sport to compete in. Why did you want to become a biathlete instead of another type of sportsman like a football or tennis player?

I started biathlon when I was ten because I thought rollerskiing looked like fun. Since then I have come to enjoy competing and pushing myself to be a better athlete. I chose biathlon over other sports because I love the sheer variety of the training – if I did most of my training as rollerskiing or running or cycling I would get bored of the sport but because we do so much that is different it keeps it interesting.

How do you balance training and competing with your education and social life? Are there things you would like to do but can’t because of training?

It is tough balancing training with studies but the staff at Edinburgh University are really understanding and do what they can to aid me. As a member of the University’s performance sport programme I am also able to train alongside other athletes in similar positions. Finding time for socialising is a bit harder but I always try to spend as much time as possible with friends.

A typical day for me might involve getting up early for a morning training session and going straight from there to morning lectures. I might get a short break in the afternoon but then it’s back to studies followed by a quick meal and a longer training session. I might then get some time to relax in the evening provided I do not have too much homework.

Do you receive any funding? If not how do you pay for equipment, travel etc?

I do not get much funding since biathlon is such a small sport in the UK. I get a bit from some sports charities and some help from a few local companies. I also get some equipment from Fischer and Team Out-There as well as free contact lenses from my local opticians but everything else has to be paid for by myself.

Will you be competing in Raubichi in the World Youth/Junior Championships? What is the selection criteria for your country?

I am going to Junior World’s this year. I was selected -along with Sam Cairns and Scott Dixon following the two World/IBU Cup selection races in Beitostolen in November. The fourth man will be selected after some more races in January.

What’s the best and worst thing about being a biathlete?

The best thing about being a biathlete is having the opportunity to travel to places I would otherwise never get to visit and meeting other athletes from other nations. There are really no negatives as far as I am concerned although it is a shame when I don’t get to go out with friends.

What would you like to change about biathlon? (the rules, equipment, schedule etc).

I would like to see a proper sprint event brought into biathlon like they have in cross-country since at the moment there isn’t really any event for shorter distance athletes and I think it could be exciting to watch.

Who is your role model? (in biathlon or in general)

Dave Smith who is a Paralympic athlete from my home-town is easily the most inspirational person I have ever met and he has had a massive impact on my approach to training and competition over the past few years. My coach Mike Dixon who has coached me since I first started biathlon has been a great role model for me over the years and is still my first port of call for advice or support.

To learn more about Dave Smith see his website: http://www.davidasmith.co.uk/

You have spent some time training in Norway with the Norwegians. What was that like and how has it made you a better biathlete?

My year in Norway was an incredible experience both culturally and in training. The biggest factors were having other biathletes surrounding me who pushed me every day, making me a much better athlete than I was before I started my time there, and having regular competition throughout the Winter for the first time in my life so now I am much more settled when I line up to start a race.

I have often considered naming my rifle to make it more personal but I have never come up with any good names. I am open to any suggestions.

Favourite biathlon track: I loved Voss but Ruhpolding is also very special to me since it is where I did my first ever biathlon race.
Favourite biathlete (past or present): I don’t really have a favourite although, like I said before, Mike Dixon has always been a big inspiration for me.
Favourite event (sprint, pursuit etc): I love the pursuit because I think it is the most exciting race as an an athlete.
Favourite/best race of your career so far? The one that gave me the best feeling was the sprint at the 2013 Norwegian Summer Championships where I finished in 7th place which surprised all of the Norwegian athletes who didn’t believe Brit’s could ski. However that has since been surpassed. The race which gave me the best feeling was the mass start at the British Trials this year. The shooting wasn’t my best ever but I have never felt stronger on the skis and the satisfaction of knowing I had done enough to qualify for the IBU cup team was fantastic.

Favourite singer/band: It varies from day to day but I really like groups like Imagine Dragons and The Script
Favourite film: The Departed
Favourite sports team: Liverpool FC and Glasgow Warriors RFC
Favourite TV show: Game of Thrones