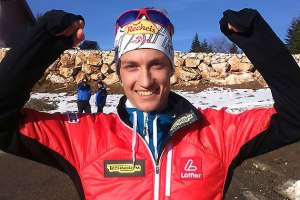 Felix Leitner is an Austrian biathlete born in Hall in Tirol on the 31st of December 1996. He recently competed in the Youth/Junior World Championships in Cheile Gradistei where he won gold in the Individual and Sprint races and bronze in the Pursuit. These were his first races in the Junior category but he already has a gold and silver medal in the Youth category in the Pursuit and Sprint from Raubichi last season.

You won double gold in Cheile Gradistei in your first World Championships as a Junior. How did you feel? Did you expect to do well or was it a bit surprising?

I felt really great. I knew that I was in good shape in running and I also felt good at the shooting range so I expected one or maybe two medals. But, I did not expect that I would be so successful.

Can you describe the races? Did you have any plan before the start about how you wanted to race?

In the Individual I was really nervous because I did not know how I should pace my race, but I did it really well. Instead at the shooting range I had an awesome feeling, that I would shoot 0 mistakes. I was really safe.
In the Sprint competition (my favourite competition) I knew that I could also win with 1 mistake, so I was not insecure after my shooting mistake in the standing. The last loop was really hard but I gave everything I had.
The Pursuit was really hard for me. I am not used to having so many races in such a short time. But because of my shooting I could get a medal again.
In the relay I absolutely wanted to exchange as first. My running was great but I had some problems on the shooting range (+3 shots).

Did you set any goals before you went to Romania and did you achieve them?

You have raced on the IBU Cup this season and you were 10th in the Sprint in Nove Mesto. What was that race like? Did it help you to prepare for the Junior World Championships?

The first day in Nove Mesto was super. I like that course.
I needed some races for the YJWCH, but it also was really important for my self-confidence.

Just now I don’t know what my next races are, but my next big goal for this season is the Junior European Championships in Pokljuka. I want to fight for medals again.
My goal for next season is to get better and better, and then we will see.

Why did you become a biathlete and why do you like the sport?

My brother is a ski jumper and in the same club they also had biathletes so I tried it and I still love it. I enjoy it probably because of the mix of running and shooting.

Do you combine sport with your education or are you concentrating only on biathlon at the present?

At the moment I go to school at Schigymnasium in Stams. But I am in the last class and I will be happy when I can only focus on sport.

No name for my rifle no.