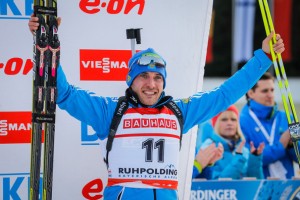 Competition is fierce if you are a Russian biathlete. The sport in Russia is hugely popular and there are many excellent Russian biathletes. One of them is Evgeniy Garanichev. At 1 metre 69 centimetres he is one of the smaller biathletes on the World Cup but it hasn’t stopped him being very successful.

Garanichev was born on the 13th of February 1988 in Novoilinskiy, Russia. He currently lives in Tyumen and this was the place where he achieved great success last season. In the Open European Championships he won gold in the Mixed Relay, gold in the Sprint and silver in the Pursuit just losing out to his teammate Anton Babikov.

The medals in Tyumen are not the only ones he has won however. Back at his home Olympics in Sochi 2014 he won the bronze medal in the Individual but unfortunately wasn’t chosen for the Men’s Relay team and so missed out on a gold medal. It was a good event for him and although there is now a cloud hanging over many of the Russian athletes in terms of doping no accusations have yet been made against the biathletes from Sochi. He also won 3 medals in the Universiade back in 2011, silver in the Mixed Relay and two bronze for the Sprint and Pursuit.

At the World Championships in Oslo last season his best result was 6th place in the Sprint event. There could have been the possibility of a medal for Garanichev but maybe his appearance and results in Tyumen was one competition too many and tired him out a little. He still achieved some really good results there finishing in the Top 25 of every event.

Overall on the World Cup he finished as the 7th best biathlete. He was also in 7th place on the Total Score the previous year which is his best place finish to date. In his career he has only ever won one World Cup race which was back in Holmenkollen in season 2011/12 when he took the Sprint race. However he has had many podium places.

Now aged 28 Garanichev has a few big seasons ahead of him. We have the World Championships in Hochfilzen and then the Olympic Games in South Korea. As a new father he will have to juggle training and family life but the next two seasons will probably be his last chance to win more medals and to propel himself into the Top 5 biathletes.

Firstly however he has to become Russia’s top biathlete and so needs to become more consistent to overhaul Anton Shipulin. Only then can he set his sights on beating the likes of Fourcade, Boe and Schempp to those all important medals. He may not be the biggest biathlete from Russia but this pocket rocket has the chance to be a really successful one!