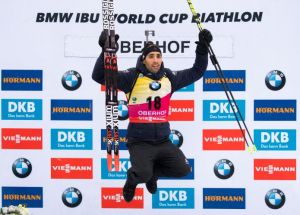 Now that I have managed to write 2018 in the title and not 2017 we can get on with the Women’s Sprint from Oberhof!

The year may have changed but the form of Anastasiya Kuzmina has not! She took her third victory of the season in the Sprint and again by a big margin.

The conditions were not too bad after heavy snow on Tuesday and then rain storms on Wednesday. The only issue today was the wind in the range, a common problem in Oberhof, and it ruined a lot of standing shoots for the ladies.

In the end Kuzmina won by 35 seconds. She missed 1 target in the prone and looked very impressive. She has never had a season like this before with such consistent success. Second place went to Kaisa Makarainen who also had 1 miss in the stand for her. It’s not many people who can take that much time from Kaisa with the same shooting score!

Third place went to Veronika Vitkova with her first podium since the 2014/15 season. It’s not such a surprise that she did it here as she now has a win, two seconds and a third place finish in Oberhof. She loves the place!

Franziska Hildebrand was 4th with 9/10, Justine Braisaz was 5th with 8/10 and Weronika Nowakowska was 6th with her best finish since having twins.

There were some personal bests today too with Linn Persson coming home 8th shooting 10/10. Sarah Beaudry was 23rd also hitting all 10. Japan’s Sari Furuya was 29th with 2 misses and Mun Ji Hee of Korea was 30th with 1 miss. The only other person to hit the perfect 10 was Julia Ransom who equalled her personal best of 9th.

Spare a thought for poor Julia Simon of France who had a nasty trip and looked like she suffered an injury.

The men raced on Friday and well it was wet. A bit of a miserable day in Oberhof with some gusts of wind thrown in for good measure. Surprise, surprise Martin Fourcade won this one. It is however just his third victory this season in the 4th World Cup. His overall rival Johannes Boe could have won this too but he missed two shots on the prone when Fourcade hit 10/10 but was just 10 seconds behind. That only left him in third however as teammate Emil Hegle Svendsen took second. He shot clean to finish 8 seconds behind Fourcade.

It’s only Svendsen’s second World Cup this season after missing Hochfilzen and Annecy. Also shooting clean in 4th was Tim Burke! Yes finally Tim is back at the sharp end with a great performance at his home away from home in Oberhof. Tarjei Boe was 5th with 1 miss and Lukas Hofer was 6th also with 9/10.

It will be a tough day for Fourcade in the Pursuit on Saturday with 3 Norwegians chasing him down!

Jakov Fak shot clen today in 7th as did Matvey Eliseev in 21st. Jeremy Finello hit all the targets in 27th, Tuomas Gronman did the same in 45th and Scott Dixon also hit 10/10 in 87th place.

Poor Edin Hodic of Serbia had a problem when his harness came off his rifle after a fall and he couldn’t finish the race.

The Pursuit races on Saturday should be very interesting with a lot of people having trouble shooting in the Oberhof range and with wet tracks it could be a great watch!