The Belarus Team has been getting stronger and stronger over the last few years. It is mainly the women who have been grabbing all the headlines with fantastic results from Darya Domracheva and Nadezhda Skardino in particular but the men’s team are doing well too.

Vladimir Chepelin is one of those who has stepped up his performances. He was born on the 15th of July 1988 and made his biathlon debut in 2011. Last season was one of his best so far.

On the World Cup he started the season well by coming 23rd in the opening round in Oestersund in the Individual. Overall he finished in 47th place in the Total Score. However it was in Oslo Holmenkollen at the World Championships where he really showed what a good biathlete he is.

In the Sprint race he finished in a fantastic 13th place which is his highest finish in a biathlon race to date. He dropped 10 places in the Pursuit to 23rd but another Top 25 finish is impressive. The Indiviual wasn’t as successful and he ended the race in 56th but in the Mass Start which is one of the toughest races he came back to take 13th place again equaling the personal best he set earlier in the week. Considering his top result in Kontiolahti at the last World Championships was 38th you can see he has made a significant step forward.

Individually Chepelin will be hoping to get his first Top Ten finish on the World Cup. He needs more consistency if he wants to improve his overall standing but I think he could break into the Top 30 overall this season. His shooting can be a bit erratic but if he can reduce the number of missed targets and stay healthy throughout the season it could be his best one yet. 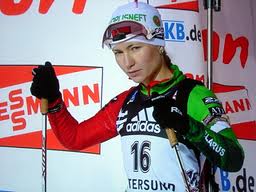 It might feel like she has been around forever but Belarusian biathlete Darya “Dasha” Domracheva is still only 26 years old! She has been competing in the Biathlon World Cup since 2005 and is therefore one of the most experienced female biathletes currently competing.

She was born in Minsk in 1986 and when she was four Darya moved to Nyagan, in Siberia. In a newly created town there was little fun to be had apart from cross-country skiing, and so Darya took up the sport. Darya later changed sport to biathlon and has won an Olympic bronze medal in the Individual event, 2 gold medals, 3 silvers and 1 bronze in the World Championships including her victory in the Mass Start in Nove Mesto.

This has led to her becoming quite the celebrity in Belarus and this year she was given the honour of presenting the voting results in the Eurovision song contest. That’s when you know you have made it! Apart from presenting Dasha has also turned her hand to movie making. She documented all the biathletes from 2008 until after the 2010 Olympics showing them training, competing and relaxing which gave all the fans an amazing insight into the life of a professional biathlete. She also starred in “The Spy Who Loved Biathlon”, and as a self-confessed lover of dance, is there nothing this woman can’t do?!!!

This year Dasha will be competing in the Olympics in Sochi, Russia which I suppose will be the closest she can get to a home Olympics and I’m sure she will have a lot of Belarussian fans there to cheer her on. She produced a great performance there this year finishing first in the Individual event. She has a consistently good shooting record and she is a strong skier. Even though she seems like such a nice girl don’t be fooled as she is also a fierce competitor.

The main problem for Dasha and all the other female biathletes is of course Tora Berger. Darya has managed to finish second in the Total Score 2 years in a row. She was also second in both the Sprint and Mass Start standings last season. When she is on top form Darya is very difficult to beat but she needs to find some more consistency over the season if she is going to topple Tora from the top spot.

So will we see her dashing through the snow this season to Olympic glory? Well she has as good a chance as anybody and so hopefully we will see her dancing on the top step of the podium next season!