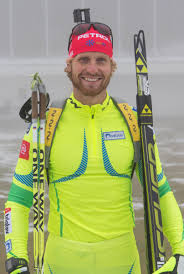 Klemen Bauer is a biathlete from Ihan in Slovenia. He was born on the 9th of January 1986 and is currently in the Slovenian Armed Forces. He has taken part in 8 World Championships and 3 Olympic Games. His best individual result to date was a 4th place at the Olympics in Vancouver and in the Mixed Relay he has a silver medal from the World Championships in 2012.

Firstly can I confirm that you are not related to Lukas Bauer(from cross country) or Jack Bauer (from 24)?!! 🙂

I guess you can confirm that 🙂 Or maybe Jack is my unknown uncle.

You come from Ihan, the Slovanian Capital of biathlon, what’s so special about such a small place that it produces World Cup biathletes? Why did you become a biathlete?

There’s a very long cross country skiing and biathlon tradition in the local community of Ihan. The first ever cross country skiing race recorded in Slovenia was held in Ihan, more than 80 years ago. Besides that, there was the biggest indoor pig farm in Europe in Ihan, if that makes sense 🙂

You are also a soldier in the Slovenian Army. Do you have many military duties or do they let you concentrate on biathlon?

Hopefully we’ll never be sent to some crisis countries on a mission 🙂 As long as we only promote the Slovenian Armed Forces it is just fine. Let’s say we have some 10 days of obligations a year. In these days we just run every year’s 3 day course.

You have been suffering from mononucleosis. How has that affected you and what training have you done? Will you be able to start the season in Oestersund?

As soon as I was diagnosed with the virus, I started to cool down and faced the fact that “don’t do anything” is the best cure around. I turned it to a positive thing right away. For the first time in the past 10 years I was forced to take a one month break which I needed. After a month and a half I stared to practice slowly. All this time I was trying to stay patient. Now I’m able to increase the load every day. Hopefully there’s enough time to be ready for Oestersund.

Your best result so far was 4th place at the 2010 Olympics. What are your goals for this season? Is the main aim to get on to the podium?

After 2010 there wasn’t as much progress as I might have expected. I tried different things but just couldn’t get all the pieces together. With some extra changes this season, the goals stay the same. I’d like to improve all my best results so far and to be more constant.

You won the silver medal in the Mixed Relay in the 2012 World Championships in Ruhpolding. How was that experience and was it quite special to do it with such great teammates?

Those are great memories. Moments not to forget. Especially with the story behind it… We all know who crossed the finish line first on that day.

Describe your typical race day. What time do you get up? What do you eat? etc.

Usually the races are set later in the day, so I try to sleep as long as possible, to shorten the time before going to the venue. Oatmeal with different fruit, honey and some yogurt is my favorite breakfast meal. If there’s enough time before the start I usually go jogging and do some light stretching or activation.

What are your strengths as a biathlete and what are your weaknesses? Do you have anything that you specifically want to improve before next season?

I can be strong with a consistent high pace, long steep climbs for example. Unfortunately I’m not that fast or as explosive as some other guys. I’d like to improve my shooting statistics which I have been dealing with for my whole career 🙂

Coming from Slovenia you get to have a home race every year in Pokljuka! What is it like there and do you enjoy racing at home or is it a lot of pressure?

It’s a big honour and a great feeling to have a chance to show our best in front of home crowds. Sometimes it can be tricky with some extra pressure which we usually create by ourselves. I’m proud that the organization of my home race is on a high level and the athletes enjoy it.

True or False: Kremna Rezina is the best cream cake in the world! Are you allowed to eat it when you are training/competing? I hope so!

True. It tastes great. But there are some more other tasty Slovenian cakes. Come to Bled and try it. You won’t regret it. I can afford it sometimes of course.

Not really. Sometimes I call her “honey”…when my shooting performance is OK. 🙂

To Austria this week and between eating strudel, singing all the songs from The Sound of Music and getting into trouble for outrageous stereotyping there was just about time for some biathlon! Generally speaking shooting clean in a Sprint Race means you have a good chance of winning it. Not however if you happen to be racing against Kaisa Makarainen! At the moment she can afford a miss and still win, much to the consternation of Karin Oberhofer. The Italian produced a great race, shooting clean, that ended with her first ever podium. Second place is fantastic for the Italian but it would have been first but for Makarainen’s amazing ski speed. In third was Tiril Eckhoff who is rapidly emerging as a real contender for the Chrystal Globe. Other ladies who impressed were France’s Justine Braisaz who on her World Cup debut finished 17th. Enora Latuilliere continued her good progress in 20th the German ladies had 3 in the TOP 10 -Hildebrand 5th, Hinz 6th and Preuss 10th.

The men’s race was a bit of a surprise even before it began with Fourcade and Bjoerndalen choosing to go in group 4 with the later starters. This was to take advantage of colder conditions making a faster track. It didn’t work and Johannes Thingnes Bø skied round like a rocket beating the field by 14 seconds. The Germans also did well here completing the podium with Simon Schempp in second and Andi Birnbacher third. Home favourite Dominik Landertinger just missed the podium coming in fourth. Elsewhere Dutch biathlete Joel Sloof qualified for his first ever Pursuit by coming in 52nd and Romania’s Cornel Puchianu matched last weeks 28th place to equal his best result.

Saturday saw the first Men’s and Women’s Relays of the season. Well they were definitely worth the wait. The Women’s race was one of the best I have seen in a long time. The lead changed several times and there were so many good performances and of course a few bad ones which made it all the more exciting. The Germans carried their great Sprint form over and were so calm and collected for such a young team especially Preuss who was on the last leg. Kummer also did well on the first leg and Hildebrand and Hinz were strong in between. It did look like Russia might cruise to victory but Glazyrina had a total meltdown on the range and handed the win to Germany. Domracheva outskied Vitkova to take second, an exceptional result for them and the Czechs were impressive in third. Italy’s chances of a podium were ruined by some bad shooting from Gontier and Tiril Eckhoff pulled of a miracle to get Norway back to 5th after starting her leg in 14th!

The Men’s race was characterised by some excellent shooting. The Russians won by only using one spare round which is incredible! Lapshin was the culprit missing one target but we can forgive him! The French also shot well only using 4 spare rounds and Norway came in third despite Birkeland and Tarjei Bø both needing all three spares in their standing shoots on legs three and four. Austria and Germany had a sprint for fourth where Landertinger beat Schempp to the line and Canada finished in sixth,a good result for them.

Sunday was Pursuit day and a dominant Kaisa Makarainen was untroubled on her way to victory. She missed 1 shot but won with time to spare. In second was Ekaterina Glazyrina who recovered in incredibly quick time from her relay disaster and also just missed 1 target. In third was France’s Anais Bescond with her best result of the season so far. She had the strength at the end to hold off Podchufarova who was 4th and a magnificent Rosanna Crawford who came from 34th to finish 5th which is a career best result for her. Other good performances came from Monika Hojnisz (POL) 40th-11th, Nadezhda Skardino (BLR) 36th-12th, Annelise Cook (USA) 50th-33rd and Daria Virolaynen (RUS) 51st-35th!

The men ended the weekend with a shocking result! Yes Martin Fourcade won – that hardly ever happens!;-) Actually he wouldn’t have won if Johannes Bø hadn’t missed two targets in his third shoot when he was well in control of the race. Simon Schempp was second proving he has a last found some consistency and Jakov Fak came in third holding off the challenge from a tired looking Johannes Bø. Vladimir Iliev added to his 19th place in the Sprint with an 11th place here which is great news for Bulgarian biathlon and other good races were had by Quentin Fillon Maillet (FRA) 45th-15th, Fredrik Lindstrom 47th-22nd and Leif Nordgren (USA) 51st-37th.

Overall Hochfilzen was a great race weekend and thank god they got the snow to let it go ahead. Kaisa Makarainen extended her lead in the yellow bib and Martin Fourcade will wear the men’s next week after wrestling it from Svendsen. Thursday is when we race again in Pokljuka and with the great results form the Slovenia biathletes the home crowd will be really looking forward to it. The biathlete will be looking forward to a sneaky Kremna Rezina(delicious Slovenian dessert!) down in Bled too! I really enjoyed all the races in Austria and I also enjoyed ‘Filzen you in!