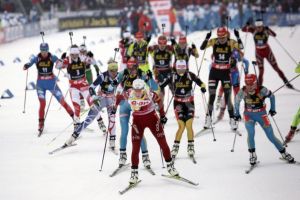 Calm yourselves people! I know the season starts on Sunday but there is still time for a little preview of the women’s competition. These kinds of seasons only come around every four years so there is a lot to get excited about and there will be a lot of focus on the Olympic Games in February. However there is still the small matter of the World Cup Tour to get on with first.

This year we find ourselves kicking off in Oestersund again and unlike last year I am hoping it will throw up some unexpected results. Tora Berger won all 3 races and went on to dominate the entire season. Obviously she is again the favourite to do so and to win medals in Sochi. While I am a huge fan of Berger and her amazing achievements I would like to see the prizes shared around a bit!

So who can we expect to challenge her in her final season? Well last year’s runner up Darya Domracheva could certainly give her a run for her money. A little more consistency for Dasha would really give Tora something to worry about. Veteran Andrea Henkel showed that age is no barrier to success with a fantastic season last year and Zaitseva also has a wealth of experience and a home Olympics to motivate her.

Don’t forget the young guns who are hot on Berger’s heels. A great end of season from Soukalova made a lot of people sit up and take notice of her and of course Germany’s Miriam Gossner is still a contender despite her pre-season injury problems. If that isn’t enough consider the double pronged attack from the Semerenko twins,and not forgetting their Ukrainian colleague Pidhrushna. Then there is Kuzmina, Mäkäräinen, Dorin Habert and Teja Gregorin to throw into the mix. Not to mention the successors to the Norwegian throne Synnøve Solemdal and Ann Kristin Flatland.

There is a lot of talent in women’s biathlon at the moment. It’s going to be a great season to follow and somehow I don’t think Berger will have it all her own way this time around. The unpredictable nature of the sport due to the shooting element means that nobody quite knows what’s going to happen and this year has the potential to be one of the best yet. I suggest you sit back and enjoy the fireworks – 2013/14 is going to be cracker!