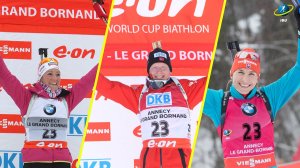 This season has been a strange one for biathlete23. It is the lowest points total so far but then there were three races less than other years with Olso being cancelled. There were no wins and only one podium but the points scoring was amazingly consistent. In fact out of 42 races there were only 4 where biathlete23 was not in the points! I am not one to name and shame but let’s just say Clare Egan, Scott Gow, Lukas Hofer and Selina Gasparin have a lot of work to do in the summer! 😉

For anyone unfamiliar with Biathlete23 (where have you been?!) this blog follows the results of whichever biathlete happens to be in bib23 for each race. It treats them like one athlete and adds up the score to see how this biathlete would have performed over the year.

This season the points total was 730, made up of 386 for the men and 344 for the women. That would put biathlete23 in 17th place in the Men’s Overall between Lukas Hofer and Dmytro Pidruchnyi and 20th place in the Women’s Overall between Linn Persson and Mona Brorsson. It seems that Pidruchnyi and Brorsson are the benchmark as biathlete23 has finished alongside them both for two seasons in a row!

Way back in December in Oestersund Atrem Pryma was the first to wear the coveted bib23 in the sprint. He came 35th and Kamila Zuk was 28th in the women’s race. In the individuals Vetle Christiansen was 31st but Ekaterina Yurlova-Percht did the best coming 16th!

On to Hochfilzen where Clare Egan came 66th in the sprint but then Benedikt Doll was 11th! In the pursuits Lisa Vittozzi was 25th and Fabien Claude was 8th. A good round for the men.

Annecy saw 6 races starting with a 22nd place for Vladimir Iliev in the sprint which Emma Lunder followed with 36th for the women. Florent Claude was also 22nd in the pursuit and Janina Hettich was 31st. In the first mass starts of the season Vladimir Iliev was again in bib23 and finished 20th with Eva Kristejn Puskarcikova 15th!

After Christmas it was off to Oberhof! The sprint yielded 30th place for Larisa Kuklina and 12th for Benjamin Weger. In the mass start it was 27th for Lucie Charvatova and 28th for Felix Leitner.

Ruhpolding did not start well with 60th place for Scott Gow in the sprint. However Franziska Preuss was 14th to make up for it! In the pursuits Baiba Bendika was 26th and Raman Yaliotnau 27th. See what I mean about consistency!

Pokljuka was next on the calendar and in the men’s individual Evgeniy Garanichev was 35th but Selina Gasparin just missed out on points in 41st. Artem Pryma was 29th in the mass start and Katherina Innerhofer was 22nd.

In February we had the World Championships in Antholz. In the women’s sprint Mona Brorsson took 33rd place and then Tarjei Boe was 4th! So close to a medal – it was very exciting for a minute there! The pursuit saw Karolin Horchler take 15th place while Johannes Dale was 17th. In the individual Fuyuko Tachizaki was 34th and then Jakov Fak came …you guessed it ..4th! AHHH So close again! Can we make a medal for 4th place like tin or something?! Lastly came the mass starts and Ivona Fialkova finished in 25th and Ondrej Moravec was 11th. Points in every race at World Champs we can’t complain too much!

The 7th round of the World Cup was in Nove Mesto and finally, finally biathlete23 got a podium! It was home favourite Marketa Davidova who did it coming 3rd in the sprint! Unicorn power + bib23 = podium! Lukas Hofer however came 64th in the men’s race! Oh well swings and roundabouts! The mass starts saw Larisa Kuklina come home in 10th and Ondrej Moravec take 19th.

At the final round in Kontiolahti Klemen Bauer was 27th in the sprint while Aita Gasparin was 22nd. Jesper Nelin was 23rd in the mass start (a good place to finish!) and Lucie Charvatova was 28th.

Oslo was unfortunately cancelled due to the corona virus and I was tempted to give biathlete23 60 points for each race but in the end I decided that it wouldn’t be fair! 😉

Hopefully next season biathlete23 can get back to winning ways and maybe bag a few more medals!

See the full results on the Biathlete23 page of the blog.