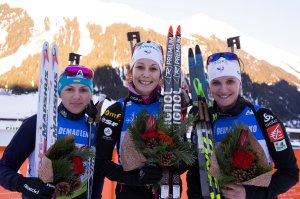 This season’s Open European Championships took place in Ridnaun, Italy from the 24th to the 28th of January. The first races were on Wednesday when we had the Individuals.

The men were first to race in sunny, calm conditions. Felix Leitner won his first senior medal at aged 21 by hitting 19/20 targets and winning by 43 seconds. A very impressive performance from the young Austrian. The silver went to Tomas Krupcik of the Czech Republic who also hit 19/20. In third place was Germany’s Philipp Horn who also just missed 1 shot. Only two men hit the perfect 20/20, Yury Shopin in 9th and Fredrik Roervik in 20th.

The women raced later but with the same conditions. This time France won gold with Chloe Chevalier. She hit 19/20 and won by almost 48 seconds. She had a fantastic ski time as silver medallist Alexia Runggaldier and bronze medallist Victoria Slivko both hit 20/20. Two other women also hit the perfect score, Nadine Horchler in 7th and Sigrid Neraasen in 15th.

After a day off on Thursday we had the Sprint races on Friday. It was a bit clouder and wetter and made conditions a little trickier. It was Andrejs Rastorgujevs who came away with the gold medal in the men’s race. Despite missing 1 target his skiing took him to the top step of the podium by 5.5 seconds. The silver medal went to Alexander Loginov just like it did last year. He shot clean as did Krasimir Anev who also repeated his result from last season taking the bronze.

In the women’s race it was the Ukraine’s Iryna Varvynets who came out on top. She took the gold with clean shooting by 12.5 seconds from Chloe Chevalier in second. Chevalier missed one target which prevented her from claiming her second gold medal here. Third place went to Japan’s Fuyuko Tachizaki. She also shot 10/10 to make history for Japan. She is the first Japanese biathlete to win an international medal.

Both pursuits were on Saturday and with Sprint victor Andrejs Rastorgujevs deciding not to race, along with another 13 biathletes who didn’t start, it left Loginov to start the race. He never gave up the lead. He missed 2 targets but still won by 27 seconds from Anev who hit 20/20. The bronze medal went to Evgeniy Garanichev who went from 19th to 3rd despite 3 misses.

In the women’s race, where there were 15 non starters, Chloe Chevalier claimed gold once again. She shot clean to overtake Iryna Varvynets and win by 11 seconds. Varvynets took the silver with 19/20 and Julia Simon also with 1 miss moved from 29th to 3rd to take the bronze medal.

The final day was reserved for the Relays. First we had the Single Mixed Relay. It was a close affair between the top three teams with Norway coming out on top. Their team of Thekla Brun-Lie and Vetle Christiansen used just six spares to take the gold. They passed the early leaders France with better shooting. Julia Simon and Emilien Jacquelin needed 11 spares. The bronze medal went to the USA who sneaked in a team of Susan Dunklee and Lowell Bailey who only competed in this event and none of the individual races.

The last race was the Mixed Relay and this time it was the good shooting of Ukraine that saw them win the gold medal. The team of Yuliia Zhurakov, Iryna Varvynets, Artem Pryma and Dmytro Pidruchnyi used 6 spares to beat Russia by 12 seconds. Victoria Slivko, Anastasia Zagoruiko, Evgeniy Garanichev and Alexander Loginov needed 9 spares to take the silver medal. Norway were third with Emilie Kalkenberg, Kaia Nicolaisen, Haavard Bogetveit and Fredrik Gjesbakk using 4 spares to win bronze.

Those results left France at the top of the medal table with 5 in total followed by Russia with 4 and the Ukraine with 2. It was a very good Championships for Chloe Chevalier who was the star performer with 2 gold medals and 1 silver.