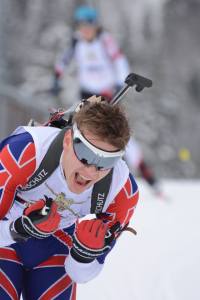 Fourth on the google search list behind a motor racer, a golfer and a boxer Scott Dixon is a popular sporting name! Most importantly however it is the name of a biathlete. Scott was born on the 9th of July 1994. The youngest of the Great Britain World Cup squad he is also the only civilian on the team. The others are all members of the armed forces.

At the age of nearly 20 he has been on the World Cup scene for 2 years now but has so far been used sparingly at the top level. He has taken part in some individual events but has competed more often as a member of the GB relay team. Still classed as a junior he also had the chance of going to Presque Isle in March to take part in the Youth/Junior World Championships. His previous 2 championships in Obertilliach 2013 and Kontiolahti 2012 yielded a best result of 40th in the Sprint. This year however he improved greatly and came in 23rd in the 15km Individual.

That was the best ever result achieved by a British athlete in these championships beating Mark Gee’s result of 35th in 1991. In fact it could have been even better as he was in second place after the first two shoots. Unfortunately Scott heard the stadium announcer mention his placing which maybe contributed to a poor third shoot and put paid to what could have been an outstanding achievement for a British athlete. Pressure is a big part of the sport though and is another step on the learning curve for Scott.

Speaking of learning Scott doesn’t have a bad teacher when it comes to biathlon. His Dad is former GB biathlete and cross country skier Mike Dixon. He is now a biathlon coach for the Cairngorm Biathlon and Nordic Ski Club in Scotland and happens to be one of a few people who have competed in 6 Olympic games. He is basically Scotland’s Bjoerndalen but unfortunately without the medals! So Scott has a great biathlon foundation, good genes and a good coach, and is a big hope for the future.

However it’s not easy competing for Great Britain in biathlon. They don’t have the resources and facilities that other countries do and like many biathletes Scott had to go and live in Germany to be able to train to a high standard. Ruhpolding is a home away from home for a lot of GB athletes and it seems to be working for Scott. Dixon junior still has 1 Junior World Championships that he is eligible to take part in next year in Raubitschi, Belarus. He has the IBU Cup and hopefully more World Cups to compete in too in season 2014/15.

On the World Cup it would be interesting to see Scott changing places in the relay team. He is always used 4th and so doesn’t usually get the chance to compete an entire lap as teams who are lapped are stopped after the last shoot and so don’t finish the race. I would like to see him tried at second or third so he can get more experience of pressure and the opportunity to actually complete the whole distance with some real competition around him.

Next season will be an important one for Scott. With the likes of Lee Jackson and Kevin Kane not getting any younger (sorry guys!) he is in line to take over from them. His ultimate goal has to be to represent Team GB at the next Olympics in Pyeongchang 2018 but to do this he needs to show continual improvement and work on not only the physical but also the mental side of biathlon. At 20 he still has time to get better and I am sure he will be a great representative for Great Britain. It’s only a matter of time before he moves up the google search list too because he is definitely a Great Scott!