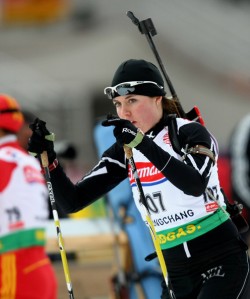 Don’t panic! It’s not the weather forecast for the rest of the week in Oestersund.( Well at least I hope it’s not because it would make the shooting pretty interesting and it’s been windy enough already!)It is in fact the title of my post about New Zealand biathlete Sarah Murphy. The nickname “hurricane” comes from her tendency to arrive, cause some kind of disaster and then leave. Slightly worrying for someone who uses skis, poles and a rifle in her chosen sport!!!

Sarah was in fact born in Canada but has dual nationality with New Zealand. She decided to represent New Zealand as she would become their first female biathlete and give her a chance to develop the sport in the country. However it is a choice that has probably made her life a lot more difficult. With no funding from her country and a difficult qualifying standard set for her for the Olympics she has a lot more on her mind than just training.

She has found a lot of help however from within the close knit and extremely nice biathlon community. She travelled with the Ukrainian team for 2 seasons and the Slovenia wax team took care of her skis last season. However like biathletes from the “smaller” biathlon nations she still struggles for funding in what can be a very expensive sport.

Sarah was lucky enough to compete in the Vancouver Olympics, which having grown up in Canada were also her home Olympics. A fantastic experience for anyone I am sure even though her results were maybe not all she was hoping for. She was only 22 at the time so the experience of a Games would surely have made up for any disappointment with her performance.

Still young in biathlon terms Sarah is just 25 years old. She has a lot of time ahead of her to improve and if she could break into the Top 40 this season it would be a massive achievement for her. She has finished just outside the Top 40 on two occasions and she definitely has the potential and desire to get there.

It would be amazing if Sarah can qualify for the Olympics(not least because she will celebrate her birthday right in the middle of it!). For New Zealand to have a representative there can only help to grow the popularity of the sport in that country. The residents of Sochi might not like a bad weather warning but I would love to see Hurricane Murphy hitting The Laura Stadium in February!(I just wouldn’t want to clear it up afterwards!)

Update as of 20/01/2014.Unfortunately Sarah isn’t going to make it to Sochi! A total travesty of justice if you ask me!!!