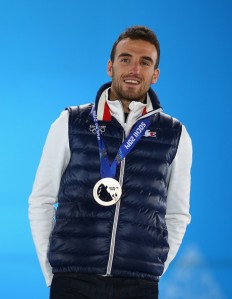 You could say that last season was magic for Jean Guillaume Béatrix! He won bronze in the Pursuit race in the Sochi Olympics and finished on the podium for the first time ever on the World Cup. He has been threatening to do this for a while now and has finally lived up to the promise that he showed in his Junior career. I didn’t want to say it’s about time Jean-Guillaume, but it’s about time!!

I am not suggesting he is old though. In fact Jean Guillaume is just 26 years old. He was born on the 24th of March 1988 in Saint Priest, France and he is the same age as Martin Fourcade, Simon Schempp and Tarjei Boe to name a few. In fact competing with these guys goes some way to explaining why it has taken a while for him to reach the podium. It is extremely difficult to make it into the TOP 3 nowadays with the vast amount of talent in men’s biathlon both old and new.

Between learning to play the piano and the guitar(show off!) Jean Guillaume had a successful career at Youth and Junior level. He won 2 bronze medals in the 2007 Youth World Championships in the Individual and the Relay before going on to win gold in the Individual the next year in the Junior World Championships. Like a lot of biathletes he found the transition to the Senior level more demanding and it is in the last few years that he has really shown what a classy biathlete he is.

He helped the French Men’s Relay team to consecutive silver medals in the World Championships in 2012 and 2013 before claiming individual glory in the Olympic Games. He came from 14th place to win his bronze medal and also did well in the Individual race finishing 6th. He arrived at the Olympics fresh from his first appearance on a World Cup podium in Antholz where he came second in the Pursuit. Not a bad couple of months!

In fact his whole season was pretty good. He matched his position the Total Score from the previous season finishing 13th overall. His best result came in the Mass Start standings where he came 6th which is a good indication of someone who can compete under pressure. He has improved his shooting a lot and I think this has been the real difference in his results. He has always been a fast skier and can compete with the top guys but his shooting has sometimes let him down. If he can continue his progress I am sure a trip to the top step of the podium is not far away.

Of course Jean Guillaume is also known for his musical skills as well as biathlon. He is part of the “biathlon band” that includes Lowell Bailey and Gabriela Soukalova. Former member JP Le Guellec has now retired so there is a place up for grabs. They were joined for their version of Venus by Larisa Nedbaeva on violin but I do play a pretty mean triangle and tambourine myself if required!:-)

So I am sure that Jean Guillaume will be performing another song next season with the band but what can we expect from his performances on the track? Well he has to be targeting a first win on the World Cup and I am pretty confident he will get it. Improving on 13th in the Total Score should also be achievable. The World Championships could provide him with more chances for medals and of course France are guaranteed silver in the Men’s Relay because that’s where they always finish but he could also take an individual medal or two. Great skiing and shooting are obviously the key to success but if he can add some Magic BéaTRIX it could see him ski away with a gold!