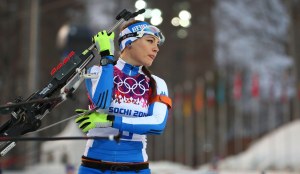 Dorothea Wierer is Italy’s best hope for a World Cup victory since Nathalie Santer. Her final win was in season 1999/2000 and so it’s about time Italy had another lady on the top step of the podium. They almost made it there with Michela Ponza who came second on four occasions but heartbreakingly never won a race on the World Cup.

Dorothea was born on the 3rd of April 1990 and like many Italian biathletes she comes from the very North West of Italy near the Austrian border and so speaks German as well as Italian. Last season was really a breakthrough season for her as she achieved some excellent but also consistent results. Her career best result came in Pokljuka where she got on the podium for the very first time on the World Cup finishing third in the Pursuit.

That was not her first time on a podium however. Just before Pokljuka she won a bronze medal in the Winter Olympics in Sochi in the Mixed Relay in a really talented team including Lukas Hofer, Karin Oberhofer and Dominik Windisch. That is not the first medal she has won either!

She enjoyed a very successful Junior career winning 5 gold medals and 1 silver. She won gold in the Individual in Ruhpolding in 2008 and another gold in the Pursuit in Canmore in 2009. In Nove Mesto in 2011 she won gold in all three events, Sprint, Pursuit and Individual, and just missed out on a clean sweep finishing with silver in the relay.

So as you can see it’s not really a surprise that she has done so well after such excellent displays as a Junior. It does take a little while to make the transition into Senior racing but with some good years of experience behind her she is now showing exactly what she is capable of in an extremely competitive womens competition. She achieved six TOP 10 finishes last season and considering that her only previous TOP 10 finish came in 2010/11 shows just what improvements she has made both with skiing and shooting but also with consistency.

All of which helped her to 16th place in the Overall Score and a 7th position the Individual. The future is looking bright for Italian Women’s biathlon at the moment. Along with Karin Oberhofer ,who has also had a great season, Wierer is setting a great example for the likes of Lisa Vittozzi another up and coming young Italian biathlete.

Next season will be very interesting for Wierer. Without the Olympics dominating everyone’s focus she will have the opportunity to concentrate on getting to the top step of the podium and try and pick up some medals in the World Championships in Kontiolahti. If she can continue to improve on last season’s performances she will be a serious contender for not just a relay medal but an individual medal too.

I really hope she can do something special next year as a boost not just for herself but for Italian biathlon too. She will face some difficult competition however as there are many strong female biathletes on the scene just now. Whatever happens I am sure she will do it with a smile on her face if not also in full Tyrolean costume because she is of course A’doro’ble Wierer!