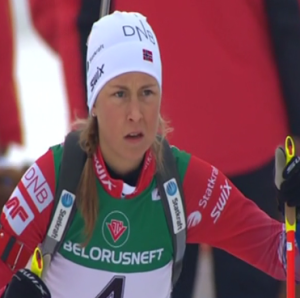 The 2015 Youth/Junior World Championships in Raubichi started off with an explosion of fireworks in the opening ceremony on the 17th of February. The next day competition got underway with a different kind of bang. The bang from the biathlon rifles as 170 competitors got underway in the Youth Women’s and Men’s Individual races and at 20 rounds each that is a lot of bang!

The women were first to compete and the first medal was won by the Ukraine. Anna Kryvonos hit 19/20 and that extra hit was crucial to give her a 18 second margin of victory over Norway’s Ingrid Landmark Tandrevold. She missed two shots as did Russia’s Elizaveta Kaplina who was third which meant they had to settle for silver and bronze. France’s Emily Battendier was impressive in 6th place as was South Korea’s Ko Eun Jung who was 9th.

In the men’s race Russia proved the strongest by winning gold and bronze. Fast skiing by Kirill Streltsov allowed him to make up for his two shooting errors to win ahead of Denmark’s Anders Emil Schiellerup who was second shooting 20/20. He made a little bit of biathlon history by becoming the first Danish biathlete ever to win a medal at a World Championships. Igor Shetko took bronze knocking Poland’s Bartolmiej Filip and Norway’s Andreas Kjeverud Eggen off the podium after they posted the same time in fourth. Home favourite Raman Shynkevich gave the crowd something to cheer coming home in 8th.

The home crowd really got something to cheer about in the Sprint race on Friday! Darya Blashko took gold and the first medal for Belarus of these championships. It is always nice to see the home nation doing well. Behind her in second came Austria’s Julia Schwaiger and Ingrid Tandrevold grabbed her second medal with bronze to add to her Individual silver. In the men’s race Norway won their first gold of the competition with Jonas Uglem Mobakken winning the Sprint from Felix Leitner of Austria who made it two medals for his country adding to the silver of Schwaiger. In third was another Norwegian Mattis Haug.

The Pursuit races both took place on Sunday morning and Norway’s Ingrid Tandrevold finally got the gold medal that her excellent form deserved and meant she got the full collection of gold, silver and bronze from these Championships. Julia Schwaiger maintained her position from the Sprint and got her second silver and her teammate Simone Kupfner made it another medal for Austria clinching the bronze. In fact Austria’s day got even better in the Youth Men’s Pursuit when Felix Leitner converted his Sprint silver into gold. He was followed by Kirill Streltsov who won silver and Mattis Haug who stayed in third to get his second bronze medal.

The last day of competition in the Youth category was the Relay. The Women’s Relay was first and consisted of a team of 3 who have to ski 6km each. The home nation did themselves proud and raced to another gold medal. Dzinara Alimbekava, Hanna Sola and Darya Blashko gave the crowd a lot to cheer about beating Russia into second and Norway into third. The Russian team of Elizaveta Kaplina, Natalia Ushkina and Kristina Reztsova took home silver giving Kaplina a second medal and the Norwegian team of Kristin Vaagaa Floettum, Eline Grue and Ingrid Tandrevold won bronze which meant Tandrevold took home 4 medals from Raubichi. In the Men’s 3 x 7.5km race there was no surprise when the Russia team won with Igor Shetko, Nikita Porshnev and Kirill Streltsov. In second were the Ukrainian team of Vitaliy Trush, Nazarii Tsebrynskyi and Dmytro Ivasenko and in third were the Norwegian team of Jonas Mobakken, Andreas Eggen and Mattis Haug.

So what have we learned from these World Championships? Well thankfully biathlon is in pretty good shape in the Youth category with some strong youngsters coming through. The Russians as usual have strength in depth on both the Men’s and Women’s side. In particular Kirill Streltsov is one to keep an eye on after winning two golds and a silver and it was great to see a Danish biathlete win a medal too. For the women Ingrid Tandevold took home gold, silver and two bronze medals and she looks like an exciting talent and is consistent too. The Ukraine seem to have a good Youth programme going as do the Austrians. Belarus are producing some good young talent too and it seems to help you win gold if you are called Darya!

For the other biathletes who maybe weren’t as successful as they had hoped it’s good to remember that World Championships are a big learning curve and if you came away from Raubichi having learned something from the experience whether it was good or bad you will be a better biathlete for it and so really everyone’s a winner! What we have all learned is that from Raubichi 2015 there is definitely some Bela-Youth!