Don’t worry you haven’t woken up back in 2019! The Open European Championships were meant to be in Otepaa, Estonia but due to lack of snow there they were switched to Minsk which held them last year too. Coincidentally Minsk doesn’t have any snow either but they do have a magic bag of snow that they can sprinkle out to resemble a track!

The first day was for the Super Sprint. If you don’t follow the IBU Cup you may not be familiar with this newer format. Basically there are two races – a shortened sprint race (3km) which all the biathletes start and then a shortened mass start (5km) with the top 30 finishers from the sprint. In both the qualification and the final you can use one spare round per shoot and the penalty loop is 75 metres.

Topping the men’s qualifying sprint was Anton Smolski and the final qualifier was Vasilii Tomshin in 30th place. In the final it was Sergey Bocharnikov who took gold at home in an exciting finish. It was a sprint for the line between 3 biathletes with Adam Vaclavik taking silver and Dmytro Pidruchnyi taking bronze. The top two both hit 20/20 but Pirdruchnyi had one miss.

In the women’s qualification it was Dzinara Alimbekava who was fastest and Natalja Kocergina who got the last spot in 30th. In the final it was Evgeniya Pavlova who took the win and the gold medal ahead of Olena Pidhrushna in second and Chloe Chevalier in third. All three women hit 20/20.

Thursday was relay day and we had the Single Mixed followed by the Mixed. The Single Mixed gold medal went to Norway with the team of Karoline Erdal and Endre Stroemsheim. They used 12 spares but were fast on the skis. The silver medal went to Germany with Stefanie Scherer and Justus Strelow who used just 5 spares. Bronze went to Ukraine’s Anastasiya Merkushyna and Ruslan Tkalenko with 7 spares required.

Friday was a day off for Minsk sightseeing! Saturday was Sprint day and it was Matvey Eliseev who struck gold for Russia. He hit 9/10 to take the win by just 4 seconds ahead of Andrejs Rastorgujevs who also hit 9/10 to take the silver medal. Bronze went to Aleksander Andersen who also missed one target.

In the women’s sprint it was Elisabeth Hoegberg who took the win with 9/10 to claim gold for Sweden. She finished 14 seconds ahead of the clean shooting Ida Lien. Home favourite Iryna Kryuko won bronze with 9/10.

The final medals were decided on Sunday in the two pursuit races. The Championships finished off how they started with gold for Belarus but this time it was double!

In the men’s pursuit Sergey Bocharnikov came from 5th to claim his second gold after winning the Super Sprint. He hit 18/20 to finish ahead of the Norwegian pair of Sturla Laegreid and Sivert Bakken. Laegreid came from 12th also hitting 18/20 for silver and Bakken came from 20th to take bronze with 18/20 too!

In the women’s pursuit it was Elena Kruchinkina who took gold for the home nation. She hit the perfect 20/20 to move from 11th all the way to first. Kristina Reztsova was second with 18/20 to take silver and Elisabeth Hoegberg stayed on the podium dropping to third and a bronze medal with 17/20.

The action now moves to erm… Minsk for the last IBU Cup of the year on the 4th of March! Not too far to travel for that one! 😉 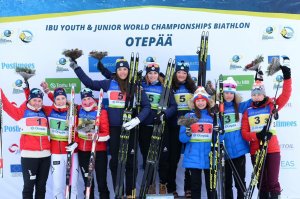 Freezing! That was the exact temperature in Otepaa, Estonia for the first race in the Junior World Championships. After a bit of rescheduling the Relays were the first races on Tuesday.

The women’s 3x6km relay went to the French team of Camille Bened, Myrtille Begue and and Lou Jeanmonnot Laurent. The did 1 penalty loop but beat the Norwegian team to gold. Une Tronerod, Emilie Kalkenberg and Kjersti Dengerud incurred 2 penalty loops on their way to the silver medal. The bronze went to the Russian team of Polina Shevnina, Emma Timerbulatova and Valeriia Vasnetkova who also went around the penalty loop twice.

The second race for the Juniors was the Individual. It was slightly warmer at -10 degrees!! There were also wind gusts in the range. The women’s race went to Poland with Kamila Zuk winning the gold medal. She won by a massive 3 minutes hitting 18/20. The silver medal went to Anna Kryvonos from the Ukraine also with 2 misses. The bronze medal went to Russia’s Irina Kazakevich who hit 17/20.

The men’s race was won by Igor Malinovskii who hit 17/20 and finished 19 seconds ahead of Norway’s Sturla Laegreid who had the same shooting score. The bronze medal also went to Russia with Said Khalili hitting 18/20.

The Sprint races were held on Saturday and Kamila Zuk made it a golden double for herself and Poland. She hit 9/10 and won the race by 26 seconds. The silver medal went to Marketa Davidova from the Czech Republic with 8/10 hits and the bronze went to France with Myrtille Begue who hit the perfect 10/10.

The men’s race was won by Russia but this time it was Vasilii Tomshin who took gold hitting 10/10 to take a 20 second lead into the Pursuit. The silver medal went to Frenchman Martin Perrillat Bottonet who missed 1 target and Norway’s Sverre Aspenes grabbed the bronze despite missing 2 targets.

The pursuits were held on Sunday and this time Marketa Davidova took the gold medal. She hit 16/20 but it was enough to pass Kamila Zuk who had to settle for silver this time with 6 misses. Myrtille Begue missed 3 shots but maintained her third place finish to take another bronze medal.

In the men’s race Sverre Aspenes moved up from third to take the gold medal hitting the perfect 20/20. Martin Perrillat Bottonet stayed in second to get another silver medal hitting 19/20. The bronze also went to Norway with Johannes Dale moving from 5th to 3rd despite missing 4 targets. 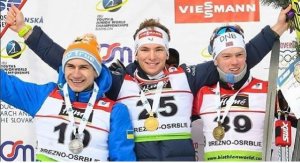 Wednesday was the first day of action and it was the Individual races that got us underway. The Youth Men went first. They have to be 19 or under to compete in the Youth races.

The first gold medal went to Canada when Leo Grandbois was the only biathlete to shoot the perfect score of 20/20. With a light drizzle and no wind it was quite surprising that he was the only one to shoot clean but it worked out well for him. Some others missed 14 or 15 shots out of 20 but they are just at the beginning of their careers and have plenty of time to improve the shooting. The silver medal went to Russia’s Said Khalili with 3 misses and the bronze medal went to Danilo Riethmueller of Germany also with 3 misses.

In the afternoon it was the turn of the Youth Women. This time France were victorious with Lou Jeanmonnet Laurent taking the gold medal with 19/20. The silver again went to Russia with Kristina Egorova also hitting 19/20 and the bronze medal went to Sweden’s Elvira Oeberg (yes there is another one!) who missed 2 targets.

On Thursday came the Sprints. The strong wind made conditions difficult but in the end it was Emilien Claude (the 3rd brother in the Claude biathlon dynasty) of France who dealt with them the best. He missed 2 targets but is a very good skier and won the race by 25 seconds. The silver medal went to Serhiy Telen of the Ukraine with 1 miss and the bronze went to Norway’s Sivert Bakken with 2 misses. Not one biathlete shot clean so 9/10 was the best shooting score possible.

The Women had slightly better conditions and the race was won by Irene Landschneider from Italy. She hit 9/10 to win by over a minute from second place. That went to Austria with Anna Gandler also hitting 9/10. Clean shooting and taking the bronze medal was another Italian Samuela Comola. The only other woman to shoot clean was Finland’s Maija Keraenen who was 13th.

Sunday was Pursuit day and for the men Emilien Claude kept his lead and won his second gold medal despite missing 4 targets. Italy took another medal with Cedric Cristille moving from 4th to 2nd to take silver with just 2 misses and bronze went to the German Danilo Riethmueller (4 misses) making that 2 medals for him. 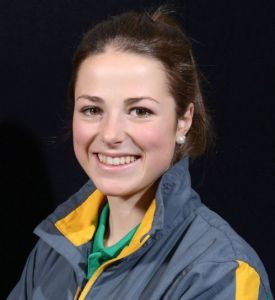 The women’s race produced yet another Italian medal with Irene Landschneider winning her second gold in a row and like Claude she also missed 4 shots. France’s Jeanmonnot took her second medal moving from 14th to 2nd with just 1 miss. Third went to Italy again with Samuela Comola hanging on to bronze.

The final races were held on Monday and it was the Men’s and Women’s Relays. The Youth Relays only have 3 biathletes instead of 4 racing. The men’s race was won by Norway with a team of Joergen Krogsaeter, Vebjoern Soerum and Sivert Bakken. They used just 6 spares between them. The Russian team took silver despite incurring 2 penalty loops on the final leg. The team of Aleksandr Miakonkii, Ilia Novopashin and Said Kalili beat Belarus into third. Their team of Kiryl Tsiuryn, Ilya Auseyenka and Dzmitry Lazouski needed just 8 spares.

The gold medal winners in the women’s race were the Russian team of Ekaterina Sannikova, Anastasiia Goreeva and Kristina Egorova. They also went on the penalty loop but still managed to beat the Norwegian team of Marthe Johansen, Marit Skogan and Mari Wetterhus who only used 4 spares. Italy took the bronze with a team of Samuela Comola, Irene Landschneider and Martina Vigna.

There were some very strong performances by the young biathletes here in Brezno with Emilien Claude and Irene Landschneider both winning double golds. It was a strong team performance by the young Italians overall and as usual the Germans, Russians and Norwegians all took medals. It will be interesting to see how they all progress in the next few years.