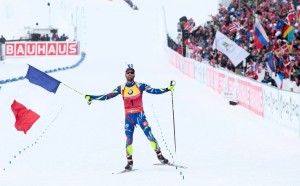 Sunday saw both of the Pursuit races in the World Championships with the Men’s race first and the Women’s race later. Martin Fourcade was defending a lead from the Sprint of 27 seconds and Tiril Eckhoff had a lead of 15 seconds.

Unsurprisingly Martin Fourcade kept most of his advantage and won his third gold medal at these Championships. He did miss 3 targets but they were on the final two shoots when he already had enough of an advantage so made no difference to the race. He even had time to receive congratulations from his team and grab a French flag to cross the finish line with. His win means that he picks up the Sprint and Pursuit Crystal Globes and also the Overall Title for the fifth time in his career.

It seems that Fourcade’s summer training in Oslo has worked out better for him than the Norwegians! However they did better in the Pursuit with Bjoerndalen defending second place to get another silver medal. The man is incredible and is probably already considering changing his mind about retirement! In third place was Emil Hegle Svendsen who missed only 1 target coming from 17th to get the bronze medal. He beat Johannes Boe into 4th place and that’s two days in a row he has just missed the podium. To be honest he doesn’t seem to be on his usual ski form.

Other impressive performances came from Jakov Fak who came from 39th to 5th getting back into form to defend his Mass Start title. Erik Lesser went from 19th to 7th, Anton Shipulin from 45th to 9th, Nathan Smith from 46th to 15th, Yan Savitsky from 40th to 19th, Tarjei Boe from 54th to 31st, Thomas Bormolini from 56th to 37th and Jaroslav Soukup from 60th to 41st.

The Women’s race was won as I thought it would be by Laura Dahmeier. She looked back on form with her skiing in the Sprint and her shooting is excellent. She hit 20/20 to win by nearly 50 seconds. In second place was Dorothea Wierer who missed 2 targets and third was Marie Dorin Habert who missed 3. In fact these two got a bit tangled up coming out of the range but it had no bearing on the result. Yesterday’s heroine Tiril Eckhoff finished 17th missing 7 targets although it wasn’t a surprise. I think she used all her energy celebrating her Sprint win and she would have had a lot of media commitments last night.

Other good displays came from Juliya Dzhyma who went from 31st to 9th, Fanny Horn Birkeland from 42nd to 19th, Paulina Fialkova from 49th to 23rd, Dunja Zdouc from 58th to 28th and Magdalena Gwizdon from 55th to 30th.

So now we have two rest days before the Women’s Individual on Wednesday and the Men’s on Thursday. Will Fourcade be able to get his 4th gold medal? Can anyone stop him? Who will take gold for the Women? Will Soukalova be able to do it or will Wierer continue her great form in the Individual? It’s all very exciting!:-)

Wow from the first, Diana Rasimovicuite, to the last, Serhiy Semenov, the bearers of “the bib” have given me a roller coaster first season in 23! From the highs of 2 wins in 1 day to the lows of the doping scandal “biathlete23” has given me more fun, excitement and disappointment than I could ever have imagined before I started all this back in November.

For those of you unfamiliar with biathlete23 I decided that as a feature on my blog I would follow whichever athlete was wearing bib 23 and record their scores and see how they did. This led to a great new way for me to watch biathlon and to get to know some of the less well known biathletes.

For the first representative to score me some points was pretty great! To most 19th position doesn’t mean a whole lot but for me it was my first 22 points! That was the only point score I got in Oestersund in fact from 4 races. In Hochfilzen I was celebrating my first podium from Irina Starykh but that was wrecked after Christmas with her positive drugs test. Fortunately the lovely Gabriela Soukalova took a 9th place in the Pursuit and Evigeny Garanichev got me 7 points in the Men’s race.

But then came Annecy, the wonderful Annecy! The first two races were Sprints and were won by Selina Gasparin and Johannes Thingnes Boe who were both wearing bib 23!!! Maximum 120 points! To say I was delighted would be the understatement of the year! Two more points finishes from Garanichev and Gregorin took my total to 169 points for the weekend! Finally I was getting some good scores!

In Oberhof 5 out of the 6 biathletes in 23 scored points; Alexander Loginov and Daniel Boehm for the men and Vita Semerenko, Weronika Nowakowska and Krystyna Palka for the women.In Ruhpolding Teja Gregorin and Simon Desthieux grabbed me 43 points from the Pursuits.The last round before the Olympics in Antholz saw 46 points scored by Franziska Preuss and Yan Savitskiy.

The Olympics was fun to watch for bib 23. I didn’t really expect a medal at my first attempt but I got very close when Evi Sachenbacher-Stehle finished 4th in the Women’s Mass Start. However like Starykh before her my joy was short lived as she too tested positive for an illegal substance and was disqualified. My best results were from Yan Savitshiy who finished 20th in the Men’s 20km Individual for the men and Veronika Vitkova who was 6th in the Women’s Individual. My favourite athlete from the Olympics though has to be the awesome Mr. Brendan Green who represented 23 in the Pursuit. He finished 35th but was kind enough to photograph his bib and send it to me and you can see it at the top of this post and on my Facebook and Twitter accounts! Thanks Brendan!

Back to the World Cup and I was keen to get back scoring some big points. Pokljuka didn’t disappoint as 98 points were added to my total from Jana Gerekova, Tim Burke, Tomas Kaukenas, Zina Kocher and Serhiy Semenov. To Kontiolahti next where a strong team of Christoph Sumann, Tiril Eckhoff, Simon Eder, Susan Dunklee, Jean-Guillaume Beatrix and Julia Dzhyma scored an impressive 114 points!

Holmenkollen was our final stop and biggest points haul of the season! I had the great privilege of Ole Einar Bjoerndalen racing in bib 23(by this time I had gotten over the fact that he won Olympic Sprint gold in bib 24 – the traitor!). The rest of the biathletes were overall winner Kaisa Makarainen who I like to think was inspired in her Pursuit performance by number 23 to get to fourth and help her win the big Crystal Globe!!! The others were Dominik Landertinger, Yana Romanova and Serhiy Semenov(he loves bib 23 -always in it!). They scored 119 points to take my grand total up to 754 points for the season, 347 from the men and 407 from the women. These put me in 25th place in the Men’s overall between Daniel Boehm and Tim Burke and 14th in the Women’s between Teja Gregorin and Franziska Hildebrand. Not bad for a debut season in biathlon!

A big thanks to all the biathletes who have been lucky enough to wear bib 23 – you have all been fantastic with some obvious exceptions! You have to take the rough with the smooth though!It has been really enjoyable supporting whoever has been in bib 23 this season. I don’t really have favourites among the biathletes so this way I can support different ones in each race and I have learned about biathletes that I previously knew little of. It’s a great way to find out more about all the biathletes and a really nice way to show support for all of them.I had no idea quite how interesting it would be to follow a bib number throughout the season but I have loved it. I can’t wait for next season to start so I can do it all over again and I hope some of you will join me along the way supporting biathlete23!! I just hope I can beat the Total Score for this season!!! GO BIATHLETE23!

For full results and participants please see my page Biathlete23.

Cleverly disguised as the German team last year (the ski suits were hard to distinguish) the Kazakhstan biathlon team enjoyed a pretty good season. One biathlete in particular achieved some of his best results ever. Yan Savitskiy was born in Ridder, Kazakhstan on April the 29th 1987 and achieved a career best result in the World Championships in Nove Mesto finishing 11th in the Individual.

Last season also saw him produce his best result on the World Cup finishing 16th in the Sprint in Anholtz. He followed that up with 3 further TOP 20 finishes and 2 in the TOP 30. He finished the season in 52nd place in the Total Score up 18 places from the previous year. He was 22nd overall in the Individual event which was his highest placing from all the different disciplines.

Yan is one of few biathletes who has already won a gold medal at a major games. He won relay gold in his home Asian Games in Almaty in 2011. Having already competed at the 2010 Vancouver Games this gives him some much needed experience in preparing for and competing in Sochi in February.Almaty is also bidding to host the 2022 Winter Olympics and so they will be looking to all their winter sports stars to try and raise the profile of Kazakhstan as an Olympic venue. Any success their athletes provide is sure to help them in their campaign.

So what does this season hold for Yan? Well his results so far in the first third of the season have been nothing to write home about.He got a 30 second penalty in the Pursuit in Hochfilzen for starting outwith the 3 second interval but still recorded his top results so far finishing 51st in both the Sprint and Pursuit. Hopefully he is saving his best form for after the Christmas break! His best event from past results would seem to be the Individual and that is probably his best chance of achieving a TOP 10 result both on the World Cup and at the Olympics. It would be an amazing result for Kazakh biathlon and Yan himself if he could do it. It would also be a boost for Asian biathlon in general.

If anyone can pull this major achievement off it has to be Kazakhs-Yan Savitsky!