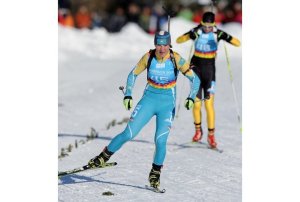 You may not be able to spell it but you should probably recognise the name. Galina Vishnevskaya is one of the up and coming biathletes on the Women’s World Cup and is definitely someone you should be looking out for next season.

She was born on the 10th of February 1994 in Semey, Kazakhstan and has already had a very successful junior career. She has two medals from the Youth Olympics in 2011 which were held in Innsbruck. She won silver in the Sprint race there and followed it up with bronze in the Pursuit.

So as you can see Vishnevskaya did very well as a junior but that doesn’t necessarily mean that it will translate to the senior World Cup. However in her case she has proved that she can also compete with the top biathletes. She has 12 Top 40 finishes to her name so far including two results in the Top 20. Her personal best result to date came in Ruhpolding last season where she was 15th in the Individual. She also managed 18th place in Presque Isle in the Sprint race.

In the Total Score last season she was 41st. Considering she is only 22-years-old that is very impressive. At 20 she went to Sochi for her first taste of Olympic action and her best result was 41st. She competed in Oslo at the Senior World Championships for the first time and finished every race inside the Top 25.

Vishnevskaya is a young biathlete and doesn’t come from one of the bigger biathlon nations but she will still be a dangerous competitor in the coming season. Her target must be to get into the Top 10 and finish consistently in the Top 20. If she stays healthy and injury free I see no reason why she can’t finish in the Top 20 overall. In fact with a little bit of luck we could see her on the podium or even take her first World Cup victory.

Along with her teammates Darya Usanova, Anna Kistanova and Alina Raikova she will be hoping to improve on their great result from the Women’s Relay in Oslo at the World Championships of 8th. She will also be trying to gain some more Nations Cup points in the Mixed and the Single Mixed Relays alongside Yan Savitsky, Anton Panton and Maxim Braun.

It is an important season coming up with the World Championships in Hochfilzen and it’s less than two years until the next Olympic Games in PyeongChang. They provide a great opportunity for Vishnevskaya to gain some valuable experience that will help her in her desire to win medals in the future and also to perform well for her country and help biathlon continue to grow in Kazakhstan. She is a good shot like most of her Kazakh teammates and with an improvement in her ski speed it could be an exciting two years for her.