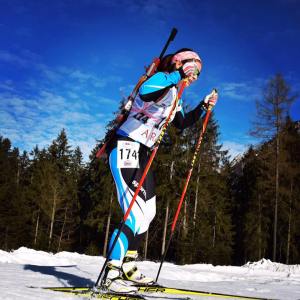 Holly Rees-Lay is a young British biathlete who is hoping to make it on to the IBU Cup this season. The 21-year-old from Oxfordshire competed on the Junior World Cup last season and achieved a top result of 60th in the Lenzerheide Individual. She currently combines biathlon with her studies at Edinburgh University. Even though she only started skiing aged 18 she has already been successful at the British World Championships in Ruhpolding. She also competes in rifle shooting.

Why did you decide to become a biathlete?

I’ve been watching biathlon on TV with my mum from when I was very small and had always wanted to try it, and my family are all keen target rifle shooters (both my parents have shot for England, and my mum has shot for Great Britain). I wasn’t particularly interested in shooting until I was about 11 when mum convinced me that if I was going to be a biathlete I’d have to learn to shoot! (Not that she thought there was any chance I would ever go skiing or take up biathlon, she just wanted to trick me into learning to shoot). From there I improved fairly quickly and shot for the GB junior squad for the first time in Germany when I was 13, and I went on to compete all over the world with my last competition being the World University Games in Gwangju which turned out to be one of my best matches.

When I was 17, a small roller ski club started in a car park 35 minutes away, so I dragged my mum along with me, mostly because I really needed to lose weight and I didn’t want to run! I started doing roller ski races, although it took 2 races before I didn’t come last… and being super competitive I got completely hooked and knew I had to improve to try and win. I was lucky enough to get involved with the Cairngorm biathlon club when I was 18 and meet Mike Dixon, who persuaded me to go to the British Biathlon Championships in 2015. Despite having only had a week on snow beforehand and having never skied with a rifle before the first race I won 2 of the 3 youth races, at which point I decided to give it a more serious go!

How do you assess last season? You raced in the Junior World Cup. What was that like?

Last season was a really steep learning curve for me. Having only ever raced at British Championships I had no idea how I would perform against anyone else, but I was quite worried that I would be coming last in every race. Ultimately my only goal was to learn as much as I could, enjoy it, race my own races and see what happened. I found that my shooting is definitely competitive, even though I had expected myself to shoot a lot better, but my ski speed needs a lot of work, which I guess isn’t surprising seeing as I’m still really new to it. It was an amazing experience to see first hand how fast the top girls from the other countries are, and has definitely given me the motivation to improve and be more competitive in the coming years.

Do you have a favourite race from last season? Which one was it and what was special about it for you?

Probably the Individual in Lenzerheide. I had a bit of a cold and knew I wasn’t skiing particularly fast in training, which wasn’t exactly filling me with confidence prior to my first ever Junior World Cup! But I was feeling OK on the day and I really wanted to race so I did- I was so nervous I missed 3 on the first shoot, but somehow came back to hit all of the last 15 targets and skied the best I ever had at that point. I hadn’t seen the results but my mum rang me almost in tears to say well done and that I’d finished 60th out of 74. It probably doesn’t sound like a big deal to anyone else but having had most of my race experience roller skiing around a car park in Oxfordshire it felt like a very big deal to me!

It’s not easy being a biathlete in Great Britain. What are the hardest things about it? What are the good things?

For me as a civilian in Great Britain, I think the hardest part is that there is no Junior squad or British training group for me to join, so I do sometimes feel very isolated training by myself. Last year I also struggled with organising my training- as I had next to no experience I often had to resort to googling how to organise training plans or ask anyone that could help me! Thankfully this year I am now getting a training plan and guidance through the British Nordic ski team, which is one less thing for me to worry about and I’m super grateful for. Lack of funding is also a problem for the team as a whole as well as myself, although I realise that it’s an issue in a lot of sports and I’m fortunate to have parents who are willing to do almost anything to support me when they see that I can’t support myself. There are also good things though- being a small team means that I’ve made some really close friends, and being the “little one” out of the British girls I feel like the older girls have really looked out for me and been a shoulder to cry on when races don’t go well, which has been really nice. Some of the ex GB biathletes have also been incredibly generous and I can’t thank them enough. And with Amanda doing so well it’s awesome to have someone who I can really look up to and aspire to be like.

How do you balance training and competing with your education and social life?

Edinburgh University have been really supportive in making sure I can catch up on any work I miss, and I was very grateful to them for letting me take my winter exams in August as I was away racing in December. Obviously I have to make some sacrifices within my social life, but I have a great group of friends who are always really supportive even when I don’t get to see them as much as I would like. I’m also very lucky to live with my best friend, who competes on the World Cup for rifle shooting (and has recently been getting some awesome results), so totally gets it if I’m grouchy for no apparent reason and just want to lie in bed watching Made in Chelsea because I’m tired!

Are there things you would like to do but can’t because of training?

Freshers week…
(For my non-UK readers Freshers week is the week before you begin classes at University and involves a lot of parties and alcohol!)

What are your goals for next season and further into the future?

Next season will be my first season as a senior so I’m hoping I’ll qualify for the IBU Cup team and then take it from there. I’m aiming to qualify for the World Cup in the next 3 years with my ultimate goal being to compete at the Winter Olympics.

What are your strengths and weaknesses? What will you be working on over the summer?

My biggest strength is definitely the accuracy of my shooting, but I need to work on shooting faster and not losing so much time on the range. My biggest weaknesses are my ski speed and my (lack of) downhill technique, but I am now working with British Nordic so I am confident I can make big improvements leading up to next winter.

Do you have any hobbies away from biathlon?

I used to do figure skating when I was younger and I’ve been getting back into that recently which has been really fun! I’m also a big American football fan and support the Cincinnati Bengals (which can be a challenge in itself…) so I try and catch up on their games in the winter!

Do you have a favourite biathlon track? Where is it and why?

I loved racing in Lenzerheide, the area is stunning and I felt the tracks really suited me with long uphills but that weren’t too steep.

Who is your favourite biathlete (past or present) and why?

Johannes Boe, because he’s always exciting to watch race and you know he’ll give absolutely everything if he thinks he has a chance to win.

Favourite biathlon nation (not your own): Norway
Favourite rifle design (any biathlete): Anton Shipulin
Favourite ski suit design (from any nation): Czech Republic
Favourite shooting range: Ruhpolding, mostly because there never seems to be any wind to worry about!
Nicest biathlete: He’s retired but I’ve got to say Mike Dixon because without him I would never have had the confidence to give biathlon a go.
Best thing about being a biathlete: Getting to train and compete in incredible places I would never otherwise think to visit.

2 thoughts on “Holly Rees-Lay: The Interview!”